The first New Forest National Park snow for 2013 has arrived. I've been out and about checking on my favourite New Forest ponies and taking in the beautiful woodland scenes. Discover them with me. 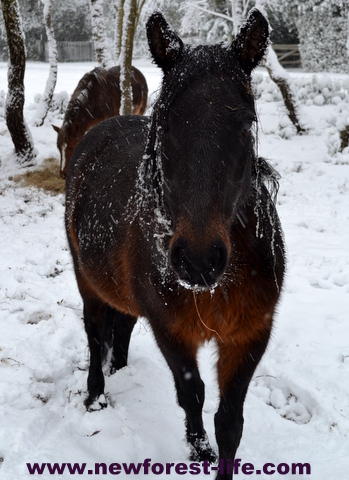 New Forest pony in the snow. She only has one eye too.

If you look carefully at this beautiful New Forest pony you may just see she has only one eye.

Despite this, she has survived on the forest and was keen to see if I had anything more interesting to offer her than the hay she was busy munching through. (Obviously, I can approach these ponies because I know them and they know me, but I'd never feed them or approach them otherwise. It's really dangerous to both of us).

Her mane, although packed with snow, was still able to keep her neck warm and protected. She's a lovely mare,  owned by Commoner friends of mine. When she first lost her eye, they were very worried she would not survive, but she has adapted very well and is happy to be back out on the New Forest National Park.

She went off to join other New Forest ponies eating gorse. We tend to wince whenever we see them eating gorse on the New Forest. It is nutritional, but has long, spiky thorns which they tend to move around in their mouths, until they can close their teeth on the spikes and chew.

Gorse is also vital in providing shelter. In deep, dense, twisting and turning paths the wind can't get to the animals. 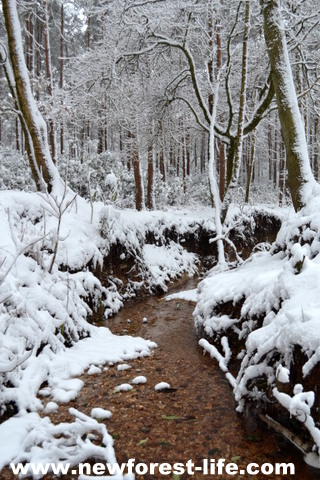 This stream was trickling through the gravel river bed producing clear, fresh water.

Look at the contrast in colour to the white, snow covered banks.

I was surprised to see the water level so low after the weeks of rain we have had in the New Forest recently.

Whenever I walk in this area I always study the banks, hoping to see a Kingfisher using the steep banks as a nest site.

I think I'll always be disappointed, because at times, this stream shows that it can have a strong surge of water, enough to bring large branches along it.

Not an ideal nesting site for a Kingfisher to choose?

I'll just keep searching for nesting Kingfishers - but not in the snow! 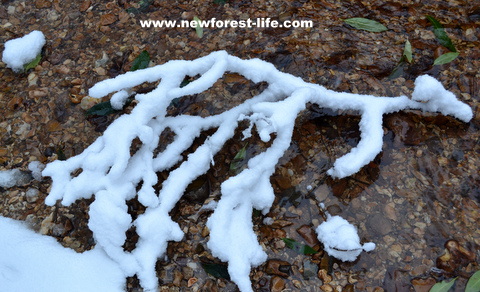 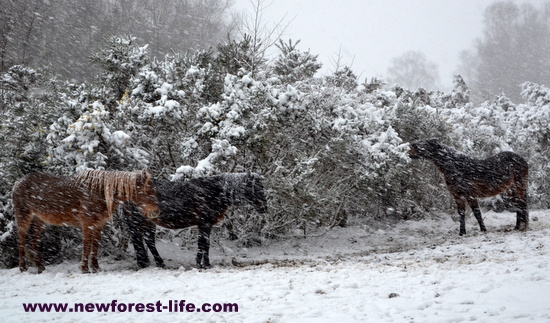 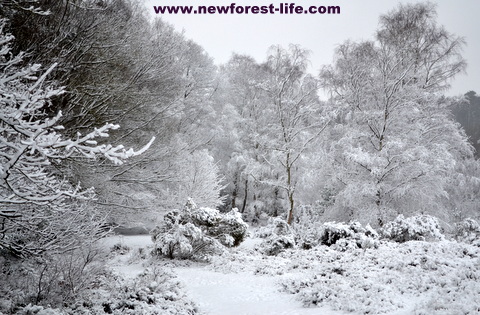 The snow in this part of the New Forest National Park was really deep. The trees were smothered because the wind was less in this part of the valley edge and the snow had just fallen straight onto the woods rather than race through the open expanse of heathland by its edge.

Snow build on the branches was over an inch on every limb which gave this effect. Not far away trees had felt the force of the blizzard and had much less snow on their branches. 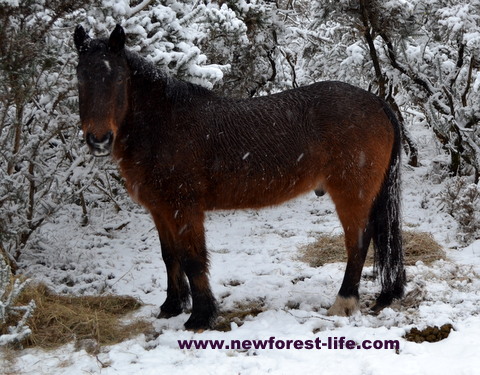 I saw this New Forest pony at the start of my walk.

New Forest snow blizzard - I had trouble getting home - good job I knew the way!

New Forest ponies in a blizzard 2 hours later on my walk.

I hope you have enjoyed my pictures and tales about the weather conditions we had to live with during this harsh winter. Here's how it affected me on a personal level in my New Forest life.

I think you can see how quickly the weather can change for all the New Forest ponies and other animals.