New Forest WW2 Canada Cross memorial is a very poignant place to visit - we visited and took this photo in November 2015. New flags have been sent over from Canada to make the memorial a little brighter. (They do suffer from our weather conditions throughout the year on this hilly spot in the New Forest). 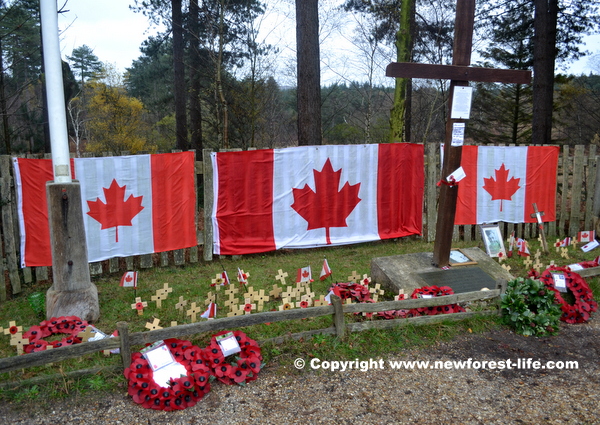 Recently I've been lucky enough to be contacted by a Canadian visitor who is in touch with a close relative of one of the servicemen who is remembered here. I felt very privileged to think they had seen my photos but also that they had made the journey to this memorial. It is a very special place as the memories never die here. Each year the flags, personal stories and heartfelt memories change, new messages are added and so the memories stay in our minds. Each little cross, photo or note has its own special history. If you have any questions about Canada Cross and want me to pop along to check anything you may have laid in memory of a relative feel free to Contact me, and I can give you an update. 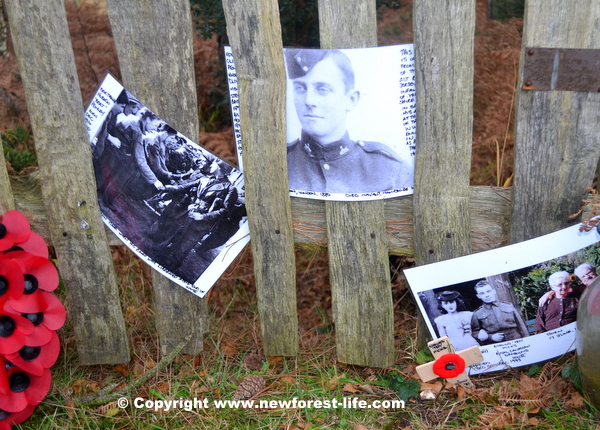 "The WWII project team recently received a letter from High Commission of Canada in the United Kingdom regarding this Canadian memorial at Mogshade Hill.  The New Forest National Park Authority working together with the High Commission of Canada and the Forestry Commission would like to explore opportunities to improve the interpretation of this site and ensure its maintenance for the foreseeable future.

We would like to make contact with those who have looked after this memorial over the years. If you have a personal interest in this site the FC would like to hear from you.  Please contact the Forestry Commission Rangers by leaving a message at enquiries.southern@forestry.gsi.gov.uk or phoning the number: 03000 645001."

Please contact them direct to get any further info you may need.

This was a special place as church services were held for all denominations and today the Canada Cross Memorial site is regularly visited and flowers laid, in memory of the Canadian servicemen who served during WW11 in this area.

The Canada Cross Memorial is a simple but moving reminder of what war can mean to all nations. There are personal messages and wreaths and flowers left on the memorial site throughout the year. 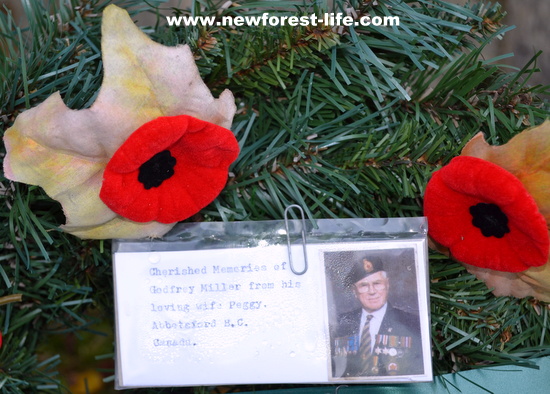 This picture was taken on the 12th November 2013 at the Canada Cross Memorial, if anyone knows of Peggy Miller from Abbotsford Canada we would love to hear from you.

Close by is Stoney Cross airfield site. It is best viewed from the air, but today you can still see the water tower and the remains of one of the runway lights as it runs adjacent to the busy A31.

500 acres of New Forest heathland and forest were used for this secret airfield, and aircraft were to be stored under camouflaged hides, made from canvas.

All outer signs of an airfield were to be hidden. It was later decided to use it as an advanced base for bombers and fighters and this meant the actual area was increased to roughly 898 acres - what affect would this have had on the Commoners I wonder? Mustangs and Liberators were two types of aircraft used from Stoney Cross.

Apparently the airfield was set up with explosives underneath the runways incase of enemy landings.

Unlike todays explosives which are more stable when being laid or moved, these needed to be replaced every few months and replaced by fresher explosives.

In his book The New Forest at War John Leete tells an amusing anecdote from Harold Sturgess a Royal Engineer during WW11.

When the explosives needed replacing they were dug up, new ones laid and then the old stock was driven in a bumpy old lorry all the way to Chandlers Ford where it was exploded! - can you imagine the danger those men were in as they drove their precious cargo, which could have gone off at any time, to be detonated at this site?

This etching, in the form of a postcard, was kindly sent to me by a visitor to my website who spent part of her honeymoon here in 1955. From research I believe the original may be dated from around 1932. Dick Turpin's Cottage was demolished, probably due to widening of the A31 which took place around 1966 to 1972 - unless someone knows differently?? 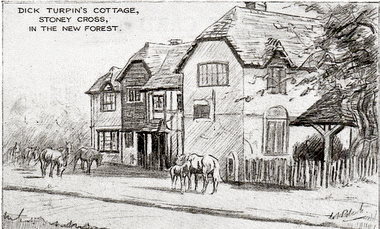 At the out break of WW11, business suffered tremendously, as did many New Forest business at this time. However, as soon as the airfield was set up, business for the Dick Turpin Cottage Tea Rooms blossomed!

Canadian troops with maroon berets and Canada on their shoulder patches mixed with our girls from the Women's Auxillary Air Force and our own British fighter squads.

Finally success was guaranteed with the arrival of the American Air Force.

It must have been great for these girls and boys to be able to leave the camps and experience the "normality" of an English tea room serving dishes such as scones, tea and jam for them on their time off. A wonderful story from a lady called Marjorie Mathew, whose parents owned and ran the Dick Turpin tea Rooms during this time combines wartime tales with New Forest Commoners tales perfectly.

As Marjorie tells it; a lovely old gelding (a castrated pony), was a frequent visitor to the tea room. His name was Jonnie and he would stand with his nose over the doorstep of the tea room and would often get a titbit from the visitors.

Jonnie was a lovely old boy and was loved by everyone as he was so mild and friendly. Geldings are often like this once their male bits have been removed.

However, one year when the stallions were let out onto the New Forest, Jonnie was standing in the doorway watching the cream teas being consumed when his plump rump was spotted by a passing stallion. 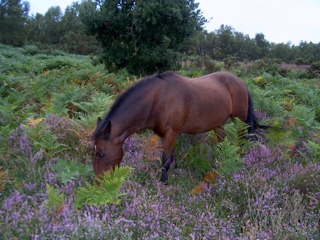 When the stallions are put out they really only have one thing on their minds and they spend most of their time on the forest bullying and terrorising most of the animals in their quest to cover all the mares.

I've often had to dive into a gorse bush as the thundering of hooves approaches as the local stallions harem is rounded up! Anyway, back to Jonnie - there he was with his plump rump sticking out from the tearoom door.

The stallion either must have seen it as a threat to his harem or just wanted Jonnie to be warned to look out. He bit hard into Jonnies rump and with a shrill scream Jonnie belted straight into the tea room!

Cups, scones, jam and tables went everywhere. Many of the diners were visitors and so leapt onto chairs to protect themselves from this mad gelding.

Jonnie was in a state of shock and what do frightened ponies often do? A very large pee!

If a pony relieves itself there really is gallons of the stuff - the tea room floor was awash with the heady, warm aroma of Jonnies fear and one terrified guest, whilst struggling to recover from the wet carnage of afternoon tea with a difference asked if this was a regular occurence??

Once Jonnie had been calmed down, the floor washed and dried out and the tables and remaining guests returned to their tables and chairs, Marjories parents could honestly say that thankfully enough it wasn't!

Another insight from Marjorie comes from when the firm of Wimpey were building the Stoney Cross airfield.

Apparently many of the labourers were Irish, which was pretty normal for wartime and the years afterwards.

Surpisingly enough many were Pakistani. It's hard to picture a Pakistani labourer beavering away during WW11 to build a secret airfield in the New Forest - Stoney Cross airfield probably has lots more secrets to divulge to us too.

Marjorie is also certain that an unexploded bomb lies beneath the A31 opposite the roadside restaurant at Stoney Cross.

Locals know a bomb landed during WW2 which failed to explode. If the unexploded bomb was removed during extensive road widening and resurfacing which has gone on, then surely it would have been mentioned?

I've always thought the A31 was quite a dangerous road for traffic reasons....I didn't realise it might be hiding a WW2 bomb as well!

Do you have a great story about the New Forest you can share with us?

My New Forest WW2 Canada Cross memories, information and personal stories hopefully show you just how important this area was to the successful outcome of WW2. For me, every time I pass and see the little Canadian flags flying about in the wind I remember how important it is to those still living in Canada and the sacrifices their families made during wartime for the New Forest WW2 Canada Cross memorial still to mean so much to so many. Long may their memory live with us.