The New Forest Drift
The Commoners check their ponies

The New Forest Drift takes place each year, from August to early November. It is when the Commoners of the New Forest National Park conduct The Drift and round up all the New Forest ponies. You can follow my little New Forest foal from his birth and his Blog as he gets older. He was taken away from his mother before the Drift to be weaned. I hope you enjoy this insight into my life as a New Forest Commoner. 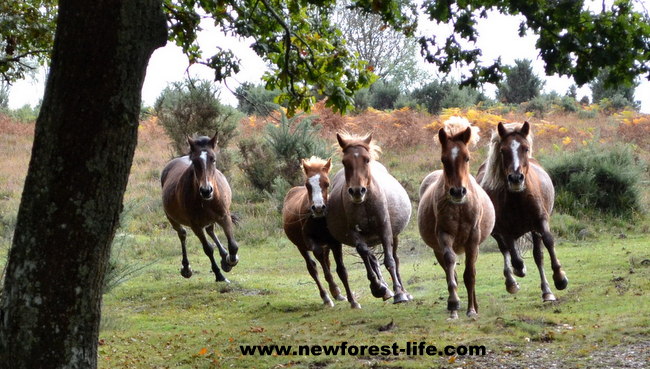 New Forest ponies at the Drift 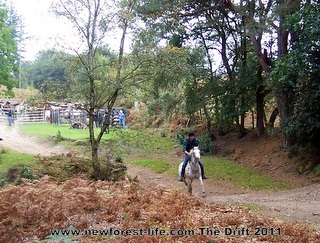 Riding off to get another lot!

Please do not attend unless you are a Commoner.

The Verderers have published the following statement for health and safety reasons again this year.

"The Verderers have taken the decision to advise members of the public using the press and this website on the dates and locations of forthcoming drifts to ensure they can are advised and can avoid the areas.

In recent years, more and more members of the general public have been attending the drifts but unfortunately, the ever increasing number of spectators is causing disruption and is interfering with the management of the drifts. If the number of spectators continues to increase, the drifts may well be in jeopardy. The official pony drifts are an essential part of the management of the semi-feral herd and their loss would seriously compromise the health and welfare of the ponies on the Forest.

The drifts are not a spectator sport and unfortunately for the reasons stated above, the Verderers now have no option but to strongly discourage the public from attending. Your co-operation in staying away from the drifts will be greatly appreciated.

Organised Events and the Drifts

Organisers of events in the Forest, such as cycle rides/races, orienteering, rambling, sponsored horse-rides etc., should be aware that the drifts are carried out from mid-August to early November each year. Such activities which take place on the Crown Lands of the Forest are only permitted with the consent of the Forestry Commission (Tel: 023 8028 3141). However, even those events which take place on the public highway may well conflict with a pony drift and the Verderers advise organisers to contact the Verderers' Office to ensure that the drifts and your event are not taking place in the same area, at the same time."

During the New Forest Drift the Commoners get together on their own able footed horses and take part in the annual health check and marking event round up which is known as The Drift.

They do this as part of the ancient Verderers New Forest rights and laws﻿ which have been passed down through the centuries.

The New Forest Drift - what happens and why?

Rounding up for the Drift pound area 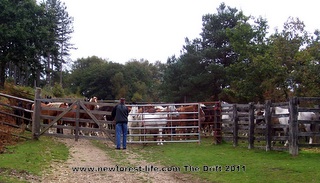 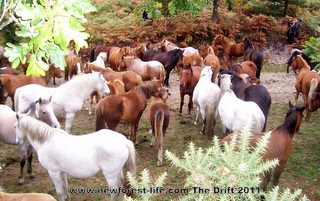 The Drift - I know all of the ponies and their characteristics 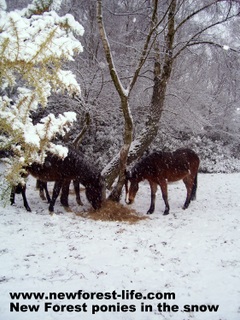 New Forest ponies during a harsh winter. The New Forest Drift helps ensure they are fit enough to face a winter like this.

Ask your New Forest question and get my answer.

Do you have a New Forest question? I'll get you an answer - if I can!

I am an experienced rider. I love the horses more than just 'riding ' Would really enjoy having the chance to help. I truly understand why this must …

I live in France and have an official riding school. I understand that every year young stock isd rouided up for sale. Please would you give me …

Where can one go to see Badgers I the New Forest. We are on holiday here from Jersey and would love to see a badger. Thank you Sadly you will …

New forest ponies Not rated yet
We saw three separate groups of ponies all running in the same direction at the same time today near to Rhinefield. Why would that be? The ponies run …

Foal purchase Not rated yet
Hi im looking to buy 2 foals at weaning from the forest how do i go about this please Hi a good place to start is https://www.nfed.co.uk/classifiedsindex.php …

Foals  Not rated yet
When and how can a purchase 2 new forest foals The foals will be taken off the forest from September in the Drifts. If you contact the https://www.newforestpony.com …

your horses Not rated yet
could I buy one and are they killed if not sold? You can buy a New Forest pony at the Beaulieu Road sales (see details http://www.nfls.org.uk) Do you …

NEW FOREST PONY- FOALS Not rated yet
WE HAVE JUST RETURNED FROM A HOLIDAY IN MOCKBEGGER IN THE NEW FOREST,(12TH-19TH JULY) WE TRAVELLED ABOUT AND SAW LOTS OF PONIES, BUT ONLY ABOUT TWO YOUNG …

Branding iron name plates Not rated yet
From previous visits to the Forest Show, I recall seeing a stand that offered hot branding slices of oak to make name plates for doors. I purchased three …

new forest drifts Not rated yet
Is it possible to help commoners with the drifts? Either as a gatherer helping direct and corra or riding to help drive of an experienced rider? The …

Pony Branding Irons Not rated yet
About 40 years ago many of the branding irons used on the forest ponys were on display in a pub in the forest. My recollection is that the pub stood on …

I hope you've enjoyed my New Forest Drift info and can understand why it isn't an "event" open to the public in general.