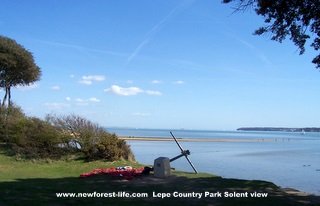 New Forest WW2 D-Day at Lepe - what happened and why?

New Forest WW2 D-Day at Lepe certainly has its own story to tell as the New Forest played a major wartime role in secret D Day operations at Lepe.

New Forest WW2 D Day at Lepe - what happened and why?

Two years of planning, which had to be kept secret, had gone into the preparation of this amazing military feat. This has been hard to beat in military history, since it happened on 6th June 1944.

Troops, their vehicles and supplies all left the New Forest coast bound for the beaches of Normandy. This D day campaign was the Allies effort to drive the German army out of occupied France and bring World War 2 to an end.

This is the role that the New Forest at Lepe played:

Again, the New Forest played a major role in hiding troops, their ammunition, equipment and vehicles in various secret locations. The shore station HMS Mastodon was based at Exbury House and controlled this operation.

Operation Overlord was so secret that even locals were unaware of what was going on. As there were spies within the New Forest who were feeding information to the Germans, this level of subterfuge was even more remarkable. 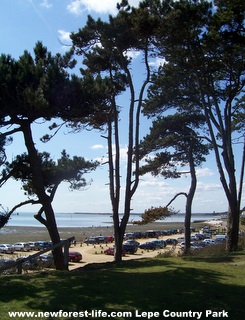 Even the local milkman had to sign the Official Secrets Act before he could deliver to the site canteen!

At Lepe Country Park, where it stands today, there were 21 army huts on the grassy area above the cliffs. If you visit there now, you will see what a stunning view you have across the Solent, but also how great care would have to have been taken not to be spotted by the enemy, from the air or sea.

This area was also mounted with anti aircraft guns which were used not only against enemy aircraft but also V1 Flying bombs or "Doodlebugs". I have heard many tales of these bombs and my family seemed to love looking out for them and waiting for them to go silent and then running for cover like mad!

Today there is a restaurant area at Lepe which used to be barracks and a cobblers shop! Apparently, this was vital as the troops must have got through lots of boot repairs whilst stationed here over the two years.

Once they had set off on the D day landings, the barracks were turned into hospital facilities for the wounded to be quickly shipped back across the Solent and the Channel from the beaches of Normandy.

The troops had been assembled and had eaten, lived and slept under their vehicles for days whist hiding in the surrounding woods and tracks, waiting for the command to move forward. 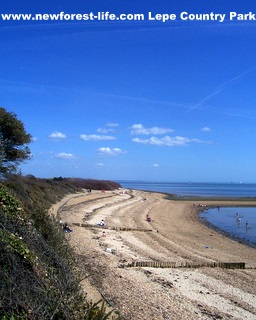 Temporary wharves, leading to pierheads allowed the vehicles to be loaded onto ships. Today, you can see

When you visit the New Forest Lepe Country Park and walk east from the car park and follow the bend of the shoreline you will see the remnants of this fantastic World War 2 D day operation.

To get the magnitude into perspective each day
12,000 tons of stores
2,500 vehicles were handled each day ready to be shipped. A harbour the size of Dover needed to be built and floated over to Normandy.

I think you'll agree that New Forest WW2 D-Day at Lepe gives us an insight into this amazing military feat. For me it is something we can be justifiably proud of and I'll always remember the milkman and the small part he plan in a successful mission.

Back from New Forest WW2 page