The New Forest during WW2 saw the Medal of Honor (U.S.A.A.F.) posthumously awarded. There was a memorial for this event held in 2010, I thought you would like more details. Each time I discover more New Forest WW2 history I find myself astounded at what went on during wartime in the forest. 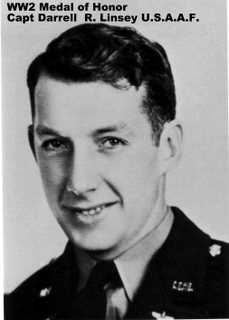 This is Captain Darrell R. Lindsey from the U.S.A.A.F.

He was awarded the Medal of Honor posthumously, and flew out from R.A.F. Holmsley in 1944.
This medal is the equivalent of the British Victoria Cross.
No British airmen were awarded the Victoria Cross from any of the New Forest airfields during WW2.

A New Forest charity Friends of New Forest Airfields have dedicated a Memorial Plaque in memory of Captain Darrell R Lindsey of the United States Army Air Force in recognition of his Medal of Honor awarded during his time in the forest during WW2.

"On August 9th 1944 Captain Linsey, of the 585th Bomb Squadron 394th Bomb Group, led a formation of B-26 Marauder aircraft on a mission from their base at Holmsley South Aerodrome.

Captain Lindsey stayed at the controls of his burning bomber to complete the attack and to allow his crew to escape but in doing so he sacrificed his own life. Captain Lindsay was subsequently awarded the Medal of Honor, the United States’ highest award for Bravery.

May 31st 2010 is the USA’s Memorial Day when Americans remember all those who fell in the service of the United States.

In addition to our official guests, including US veterans, the public will be most welcome to attend. The US bugle call Taps will sound at 3pm bringing the event to a close.

Obviously the Friends would like to erect as good a plaque as possible and so they are appealing for donations to help fund the plaque.

The cost will, they expect, be about £400 and any additional funds raised will be divided equally between the charity and the Help for Heroes campaign.

Here's a bit about this charity and the wonderful work it does.

The Friends of the New Forest Airfields is a registered Heritage Educational charity whose patron is Ailsa Montagu. Th charity has three principal aims:

To maintain the New Forest Airfields Memorial at Holmsley South.

The New Forest Airfields’ Memorial is on Black Lane, off Forest Road at Holmsley South, just off the A35 between Christchurch and Lyndhurst.

To commemorate the achievements of the New Forest Airfields, and those associated with them, from 1910 to the present day.

To operate an interpretation centre to assist in the study of the history of airfields and to provide on request an outreach educational programme of talks, visits, articles and stands.

2010 is the centenary of powered flight in the New Forest.

In case you have missed my information on these New Forest WW1 and WW2 airfields All the details are here. Some I have visited recently and have taken photos of their present state - which isn't always good unfortunately.

I hope you have enjoyed reading about this brave young serviceman and now understand, as I do, the tremendously brave acts that were going on, throughout this New Forest WW2 period.